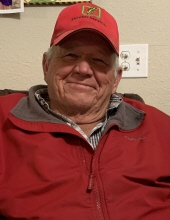 Per Rodney’s request cremation will take place and there will be no public visitation.

Rodney was born to Rodney Sterling Shivers Sr. and Frances Pearl Prewitt Shivers in Cleveland, MS on March 18th, 1954. Rodney was the oldest child, having a younger brother, Jeffery and a younger sister, Stacey. Growing up in a farming family Rodney was helping on the farm from a young age and fell in love with raising crops from the soil.
Rodney attended the local private school where he played the position of tackle for Bayou Academy. He enjoyed his formative years playing football and growing up in the south. Over the years, Rodney has shared many stories of his school days and all the mischievous things he and friends did in those early years. After graduating Bayou, he went on to attend Mississippi Delta Junior College for a short time.
Rodney met his future wife Debbie Cummings, in 1975 while she was attending Delta State University in Cleveland, MS. Rodney and Debbie attended the same church and student union. A friend of Rodney's, Mike Templeton suggested Rodney and Debbie join him and his girlfriend on a double date, which sparked their relationship. They later married on August 7th, 1976 in Helena, Arkansas. They were happily married for 44 years. For the early years of their marriage they lived in the Mississippi Delta where Rodney was working as a farm manager. On April 15, 1980 they welcomed their first child, a daughter, Dawn Alayne Shivers to the family. Two short years later their first son Jerrad Grant Shivers was born February 16, 1982.
Later the family moved to Brooksville Florida where Rodney enjoyed self-employment as a contractor for counties and the state of Florida maintaining the right of ways. While living in Florida, Rodney and Debbie's youngest son, Blaine Bryant Shivers arrived on May 30, 1987. They spent the next 14 years in Florida before making their largest move to Sheridan Lake, Colorado to rejoin his love of farming.
Upon their move to Colorado, Rodney took a position as Sales Manager for Scherler Sales but ultimately it was his love for self-employment that drew him back to opening his own business. With the help of his oldest son Jerrad, Shivers Services started to take shape in 2003. The two worked closely together to get the business up and running. In 2012 the business expanded to an office and supportive grounds in Holly, Colorado. At this time Rodney's youngest son Blaine had returned home from the Marine Corps to join the family business.
Over the years Rodney's family has grown with the addition of two daughters-in-law, Brianne (Jerrad), Heather (Blaine) and a son-in-law Tom (Dawn) who blessed him with eight grandchildren: Addison, Zoey, Lacey, Mikaela, Brooklyn, Evelyn, Samantha, and Jaxson, which he immensely enjoyed entertaining and aggravating. Rodney was the instigator to many shenanigans with his grandchildren. Also Rodney was always a big supporter of his grandkids' involvement in 4-H.
Rodney enjoyed rising early to meet the local farmers for coffee around the round table at the business office. Rodney was a well-liked figure in the community known for his southern drawl and the ability to weave a story for entertainment and to make a point, at times embellished, but always entertaining and humorous.
Rodney passed away in Saint Joseph's Hospital in Denver Colorado after a valiant 21-day fight with COVID-19 and Pneumonia. He was a strong believer in Christ Jesus as his Lord and Savior. He now rests peacefully with his Lord no longer battling with the pain of this world and is no doubt farming with equipment that no longer breaks down and an infinite supply of rain within the gates of Heaven!

Those desiring, may make memorial contributions to the St. Jude’s Children’s Hospital either direct or in care of the funeral home office.
To order memorial trees or send flowers to the family in memory of Rodney S. Shivers, Jr., please visit our flower store.