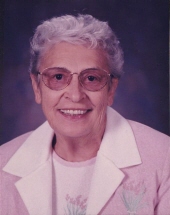 Rita M. Oberwortmann
A Funeral Liturgy for Harlingen, TX resident and, formerly, a longtime Lamar resident, Rita M. Oberwortmann, was held at 10:00 AM, Thursday, December 12 at the Peacock Family Chapel with Reverend Charlie Sena as celebrant. A Rite of Committal followed at Fairmount Cemetery.

Mrs. Oberwortmann was born on November 22, 1924 at Oshkosh, Wisconsin to John and Mamie (Faust) Jungwirth and passed away at Sunshine Haven Hospice in Olmito, TX on December 5, 2013 at the age of 89.

Rita is preceded in death by her parents, her husband G.H. "Mike” Oberwortmann on February 7, 1998, her granddaughter Colleen Doyle on July 3, 2011 as well as her brother Milton Jungwirth and sister Jacqueline Saley.

She is survived by her daughter Jane (Jim) Meeker of Roswell, NM, son Mark (Susan) Oberwortmann of Port Isabel, TX as well as her grandson; James Oberwortmann of Wichita, KS, great granddaughter Mckenzie Doyle and grandson-in-law Mike Doyle of Phoenix, AZ, and many nieces and nephews.

Rita graduated from high school and went on to earn her teaching degree in Wisconsin.  In 1945, after teaching in Merrill, WI, she was ready to travel and teach English and/or Spanish in other parts of the country.  Her first stop was Lamar and after stepping off the train and only seeing dirt streets she thought to herself, “What have I done?”

While in Lamar, Rita was helping high school students with their play performance and Mike happened to be there. After noticing Rita he knew he had to find out who she was.  Rita’s travels included Monte Vista, Boulder and Wisconsin, and through them all Mike continued to court her. She finally married the love of her life August 26, 1950 in La Crosse, WI and they set up housekeeping in Lamar in an apartment where KFC stands now. After six months they moved to Stewart Place where they resided until 1973. For the rest of her life, Rita always commented on how lucky they were to have lived there for those years because of all the wonderful neighbors who became life- long friends.

Later Rita and Mike moved out on Prosperity Lane and enjoyed “country” living for about 25 years.  While living there, she got to spend time with her two grandchildren, Colleen and James.  There was always something for them to do from riding the golf carts, to fishing in the pond, feeding the ducks, or playing Skip Bo. The fond memories from those days always brought a smile to Rita’s face.

Rita’s husband, Mike, and Mike’s father, Walt Oberwortmann started W.H.O. Manufacturing in Lamar, Colorado.  When Walt decided it was time to start a pension fund for employees of the company, he looked to Rita for counsel.

At one of the first organizational meetings to establish the fund, Walt was told he would need a lawyer and accountant to set up and manage the retirement fund.  Walt listened to them and never said a word. Then he turned to Rita and asked if she would do it. She said yes as long as she could choose her own accountant and lawyer.  Rita had utmost regard for Walt and his show of confidence in her was an honor she greatly prized.

Rita and Mike had some opportunity to travel and Italy became a favorite destination.  Another vacation spot they enjoyed was South Padre Island, Texas.  After being widowed, Rita would eventually take up residence there.  Metal detecting on the local beaches became her favorite hobby. One day her treasure hunting might yield only 2 old pennies, while on other days she might find a real treasure such as a piece of gold jewelry.  She always made time to talk to anyone on the shore that wanted to know what she was doing.

Feline friends were always a part of Rita’s life and, while living on South Padre, it wasn’t long before a cat adopted her.  She called him Lucky and they were inseparable, each looking out for the other.  If ever Rita were “lost,” Lucky would start howling until they were reunited.

Rita has been residing in assisted living in Harlingen for about the last four years.  If she was not playing WII bowling or watching football, then she could be found with a book in her hands.  Yes, she finally had time to read.

Her family will miss her but they hope her remaining friends and relatives will remember all the special times they shared with Rita and Mike.

Memorial Contributions may be made to Sunshine Haven (a Hospice facility) either directly by mail to 7105 West Lakeside Blvd., Olmito, TX 78575, or in care of Peacock Funeral Home.
To order memorial trees or send flowers to the family in memory of Rita M. Oberwortmann, please visit our flower store.