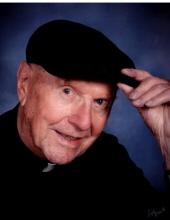 Reverend Raymond P. Grimes entered into rest on September 12, 2017, at the Bent County Nursing Care Center in the presence of his dear friends and parishioners. Father Grimes was preceded in death by his parents and some of his siblings. He is survived by his sister Margaret Kieffer and numerous nieces and nephews.

Father Grimes was born February 13, 1922 to Leroy and Margaret (Genz) Grimes in Dubuque, Iowa. As a young man, he answered his Country’s call to duty and served in the Army. He was stationed in the South Pacific during WWII. After the War, he followed his heavenly vocation and studied at Loras College in his hometown and St. Thomas Seminary in Denver. He was ordained a priest for the Diocese of Pueblo on May 19, 1955, at St. Rose of Lima’s Priory, Dubuque, by the Most Rev. Loras T. Lane, Auxiliary Bishop of Dubuque.

His first assignment was to St. Francis Xavier Parish, Pueblo. On December 2, 1958, he was appointed to the faculty of Pueblo Catholic High School. The following month he was named rector of St. Joseph Preparatory seminary in Pueblo in addition to his high school duties. On March 3, 1960, he was appointed director of the Confraternity of Christian Doctrine. For the 1960-61 school year, he also served as assistant at St. Joseph Parish in Grand Junction and as chaplain for the Newman Club at Mesa Junior College, Grand Junction. He also served as deanery moderator for CCD. On December 30, 1961, he was appointed administrator at St. Anne Parish, Pueblo. Next, he served as Diocesan Director of Vocations from March 15, 1963 until his appointment as Pastor of St. Joseph Parish, Monte Vista, on July 30, 1965. On September 23, 1966, he was named to the Diocesan Board of CBS. He was also Pastor at the following parishes St. Rita of Cascia in Mancos, St. Mary’s in Montrose, Mancos for a short time, Our Lady of the Assumption in Pueblo, St. Frances of Rome in Holly, St. Therese in Vineland, St. Francis de Sales/Our Lady of Guadalupe in Lamar.

Services for Fr. Grimes are as follows:

Cathedral of the Sacred Heart