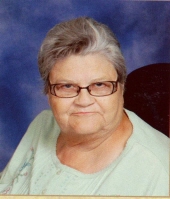 Phillis V. Mauch
A Memorial Service for lifelong Lamar resident, Phillis Mauch will be held 1:00 PM, Saturday, April 19, 2014 at the Lamar Christian Church with Ian Blacker officiating.
Phillis was born on June 23, 1946 to Fred A. and Esther (Ortman) Mauch at Lamar, Colorado and passed away at Swedish Hospital in Denver on December 20, 2013 at the age of 67.
Mrs. Mauch was preceded in death by her parents, daughter Kim Foster, brother Herb Mauch and her sister-in-law Margaret Ann Mauch.
She is survived by her daughter Tina Priddy of Lamar, grandchildren Les Foster and Melodie Gruber. Her siblings; Ida Mae (Clayton) Stout of Denver, Twyla Batterton of Lamar, Delora Kollar of Killeen, TX, Vern (Alice) Mauch of Lamar, Donald Mauch of Lindsborg, KS and Leslie Mauch of Pierce, CO. Also survived by other relatives and many friends.
To order memorial trees or send flowers to the family in memory of Phillis V. Mauch, please visit our flower store.