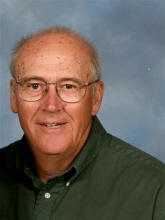 A Funeral Liturgy for longtime Lamar teacher, counselor and coach, Phil Forney was held at 10:00 AM Tuesday, September 4, 2012 at the St. Francis de Sales/Our Lady of Guadalupe Catholic Church in Lamar with Deacon Allan Medina officiating.  A Rosary Service was held prior to the Liturgy at 9:30 AM. A Rite of Committal  followed the services at Fairmount Cemetery.

Phil was born on September 8, 1942 at Mound City, Missouri to Solomon and Louise (Munkres) Forney and passed away following a sudden illness on August 30, 2012 at Swedish Medical Center in Englewood, CO with his family by his side at the age of 69.

Phil is survived by his wife; Mary Frances of the family home in Lamar, sons; Kevin Forney and Craig (Leigh) Forney of Lamar. He is also survived by his grandchildren; Braden, Christian, Easton Forney and Chris Torres and his sister; Sue (Dean) Travis of Scottsdale, Arizona as well and a host of friends.

Memorial Contributions may be made to St. Francis de Sales/Our Lady of Guadalupe Catholic Church or to the Lamar Recreation Department directed to the completion of the 4-Plex softball fields either direct or in care of the funeral home office.
To order memorial trees or send flowers to the family in memory of Phil Forney, please visit our flower store.