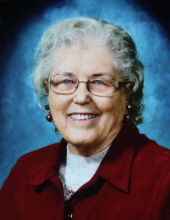 Patricia Ann Esry-Langin
A Memorial Mass for Colorado Springs resident, Patricia Ann Langin, will be held at 11:00 AM Saturday May 19, 2018 at the St. Francis de Sales/Our Lady of Guadalupe Catholic Church in Lamar with Reverend Mariusz Wirkowski as celebrant. A private family burial will take place at a later date in Colorado Springs. A reception will follow the Mass in St. Cletus Hall and all are welcome to attend.
A rosary service will be held at 10:30 Saturday May 19, 2018 also at St. Francis de Sales/Our Lady of Guadalupe Catholic Church with Rita Ybarra reciting.
Patricia Ann (Esry) Langin died peacefully in her sleep at Medallion Nursing Home in Colorado Springs, CO on April 24, 2018.
Pat was born on February 27, 1930 in Lincoln, NE, the only child of William and Christina Esry. She attended the University of Nebraska in Lincoln before marrying Edward Langin in 1950 and moving to the Langin family farm near Imperial, NE.
In 1961 the Langins moved to Brookings, SD and six years later they moved to Walsh, CO. In 1980 Ed became the Area Director for CSU Extension Service in Lamar, CO, where they spent the rest of their lives. Pat was active in her church and her sorority. She enjoyed gardening and playing bridge.
Pat is preceded in death by her husband, Edward; her son, William; and her granddaughter, Lauren.
She is survived by her daughter, Ann (Jerry) Langin-Hooper; her son, James (Lori) Langin; her daughter, Mary (Rick) Grouette; Lynda Langin Maxwell (widow of William); eight grandchildren and one great-grandchild.
To order memorial trees or send flowers to the family in memory of Patricia Ann Langin, please visit our flower store.