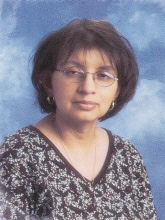 A Mass of Christian Burial for lifelong Lamar resident, Pamela M. Andrade was held at 10:00 AM, Monday, February 4, 2013 at St. Francis de Sales/Our Lady of Guadalupe Catholic Church with Reverend Charlie Sena as celebrant. A Rosary service was held at 6:00 PM, Sunday, February 3, 2013 with Deacon Henry Wertin reciting also at the church. Interment followed at Riverside Cemetery.
Visitation for Pam was held on Saturday, February 2, 2013 from 1:00 PM until 4:00 PM at the Peacock Funeral Home.

Pam was born on January 30, 1965 at Lamar, Colorado to Frank F. and Esther (Chavira) Andrade and passed away at the age of 47 in the early morning hours of Monday, January 28, 2013 at her home with her family by her side.

Pam is preceded in death by father Frank Andrade on October 4, 2006.

She is survived by her mother Esther Andrade of Lamar; her siblings and their spouses; Rachel (Richard) Belmudez of Aurora, Kathryn (Benny) Ramirez of Lamar, Frank, Jr. (Phyllis) Andrade of Aurora and Patricia (Scott) Cook of Highlands Ranch, CO as well as numerous aunts, uncles, nieces, nephews, cousins other family and many friends.

Memorial contributions may be made to the Lamar Area Hospice direct or in care of the funeral home office.
To order memorial trees or send flowers to the family in memory of Pam M. Andrade, please visit our flower store.