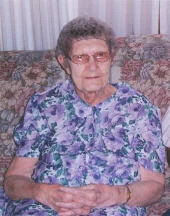 Visitation for Minnie was held from 9:00 AM to service time on Monday at the Peacock Funeral Home.

Minnie Leona Henry was born on June 13, 1917 in Isabel, Kansas to Archie Carl and Eva Ora (Swinson) Vanderwork and departed this life on Friday April 12, 2013 at the Homesteader Nursing Home in Garden City, Kansas at the age of 95.

Leona graduated from Montezuma Kansas High School in 1935.  She met her husband Harold E. Henry in Towner, Colorado and settled on a farm northwest of town.  Leona Spent her time there as a homemaker; Helping with some of the farm work; and was also a cook at the Plainview School for over 20 years.  They sold their farm in Towner and moved to Lamar in 1983 and then finally settled in Garden City, Kansas in 2001.  Ceramics, card games, bingo, and basketball on T.V. were some of her favorite pastime activities.

Mrs. Henry was preceded in death by her parents and by her husband – Harold E. Henry on September 30, 2003.

Minnie Leona Henry is survived by her twin sons – Merlyn (Kathy) Henry of Miliken, CO; and Merle (Carolyn) Henry of Holcomb, Kansas; by four grandchildren – Melissa (Bill) Savolt of Garden City; Jeff (Alisha) Henry of Oklahoma City, Oklahoma; Kenny (Jennifer) Kessler of Loveland, CO; and Rayelynn (Reid) Husmer of Centennial, CO; by nine great grandchildren; by one brother – LaVerne Gail Vanderwork of Eads; and by one niece – Sylvia (Joe) Shields of Eads; along with a host of friends.

Those desiring may make memorial contributions to the St. Dominic School in Garden City, Kansas either directly or through the funeral home office.
To order memorial trees or send flowers to the family in memory of Minnie Leona Henry, please visit our flower store.