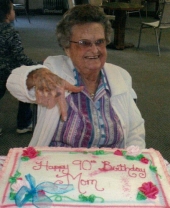 May Mountain
A Celebration of Life for longtime Lamar resident May Mountain was held at 10:00 AM, Thursday, April 17, 2014 at the Lamar First Baptist Church with Ray Matteson officiating. Interment followed at Fairmount Cemetery.
Visitation for Mrs. Mountain was held from 5:00 PM until 7:00 PM, Wednesday, April 16, 2014 at the Peacock Family Chapel.
May was born on March 11, 1922 at Running Water, Texas to Arthur Alvin and Pearl May (Harp) Woods and passed away on April 12, 2014 at her home in Lamar at the age of 92.
She is preceded in death by her husband Joe Mountain on January 9, 1996, parents and her grandson Johnnie Hagerman, one brother; Ralph (Faye) Woods and her sister Opal Williams.
May is survived by her daughters and their husbands; Sandy (Gary) Campbell of Lamar and Donna (John) Hagerman of Fowler; her grandchildren; Marty Campbell, Michelle (Michael) Moses, Kevin (Myriah) Hagerman and Nicholas (Jeri) Hagerman, granddaughter-in-law Lori Hagerman as well as 13 great grandchildren and one great-great grandchild.  Numerous nieces, nephews other relatives and many friends also survive.
Memorial contributions may be made to the Lamar First Baptist Church either direct or in care of the Peacock Funeral Home.
To order memorial trees or send flowers to the family in memory of May Mountain, please visit our flower store.