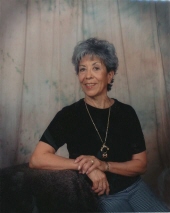 A Mass of Christian Burial for longtime Lamar resident, Mary Margaret Aguilera, affectionately known to many as Marge, was held at 10:00 AM Saturday April 14, 2012 at the St. Frances de Sales/Our Lady of Guadalupe Catholic Church in Lamar.  Reverend Charles Sena was the celebrant and burial followed in the Wiley Cemetery in Wiley, Colorado.
A rosary service for Marge was held at 9:30 AM Saturday April 14, 2012 also at the St. Frances de Sales/Our Lady of Guadalupe Catholic Church in Lamar.  Deacon Allan Medina recited the rosary.
Visitation for Marge was held from 1:00 PM to 5:00 PM on Friday April 13, 2012 at the Peacock Family Chapel.
Marge was born on July 24, 1936 in Wiley, Colorado to Sesario R. Aguilera and Ysidora (Lucero) Aguilera and departed this life on Saturday April 7, 2012 at her home in Lamar with her loving family by her side at the age of 75.
Ms. Aguilera was preceded in death by her parents; by one grandson – Eric Torrez; by one brother – Frank Aguilera; and by one sister – Daria Hernandez.
Marge is survived by two children – Vickie (Ben) Torrez of Wiley; and Timothy Aguilera of Lamar; by four grandchildren – Joshua Eric and Janea Raylene Aguilera of Lamar and Thayden Maximus Nichols and Devlynn Wayanne Schultz-Aguilera also of Lamar; and by her siblings – Sally Jacobs of Wiley; Nancy Perez of Wiley; Emma Ortiz of Denver; Lawrence (Marcela) Aguilera of Wiley; Willie (Regina) Aguilera of Colorado City; Inez (Rod) Rogers of Howard, Kansas; Ray (Elaine) Aguilera of Pueblo; Joe (Linda) Aguilera of Las Animas; Isabel Mary (Everett) Babb of La Junta; Carol Franco of La Junta; also surviving are numerous nieces, nephews, cousins, other relatives, and many friends.
Those desiring may make memorial contributions to the Marge Aguilera Memorial Fund in care of the Peacock Funeral Home.
To order memorial trees or send flowers to the family in memory of Marge Aguilera, please visit our flower store.