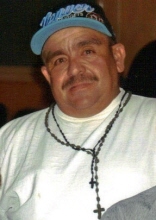 A Mass of Christian burial for longtime Lamar resident, Marcelino I. Ramos, Jr. affectionately known to many as Marcy, was held at 10:00 AM Thursday January 2, 2014 at the St. Francis de Sales/Our Lady of Guadalupe Catholic Church in Lamar.  Reverend Charlie Sena was the celebrant and burial followed in the Fairmount Cemetery in Lamar.

A rosary service was held at 9:30 AM Thursday January 2, 2014 also at the St. Francis de Sales/Our Lady of Guadalupe Catholic Church in Lamar.

Visitation for Marcy was held from 2:00 PM to 7:00 PM Tuesday December 31, 2013 at the Peacock Funeral Home and prior to the rosary at the church on Thursday.

Marcelino I. Ramos, Jr. was born on April 8, 1978 in Lamar, Colorado to Marcelino Ramos Sr. and Mary (Herrera) Ramos and departed this life on Friday December 27, 2013 at Memorial Health Systems in Colorado Springs, Colorado at the age of 35.

Marcy is preceded in death by his father as well as his maternal and paternal grandparents.

Those desiring may make memorial contributions to the Marcelino Ramos memorial fund in care of the Peacock Funeral Home.
To order memorial trees or send flowers to the family in memory of Marcy Ramos, please visit our flower store.