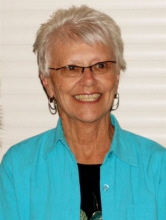 Lois E. Tyree
A Memorial Celebration for longtime Lamar resident, Lois E. Tyree was held at 11:00 AM, Monday, August 27, 2012 at the Lamar First Baptist Church with Reverend Dave Davis officiating. There was a private family interment of her ashes at Ft. Lyon National Cemetery on Tuesday morning.
Lois was born on November 6, 1939 to Olie All and Cora Mae (Welty) McGuire at St. Edwards, Nebraska and passed away on Tuesday, August 21, 2012 with her family by her side at the age of 72.
Mrs. Tyree is preceded in death by her parents.
She is survived by her husband Keith Tyree of the family home, daughters; Konda (Jim) Jorgensen of Greel

Lois was so proud of her family and proud of those that served or are serving in the military to include; husband; Keith Tyree (Navy) son-n-law Kevin Cavanagh with the Air Force, grandchildren; Drew (Marines), Dane (Army, stationed in Afghanistan), Bryan (Air Force), Bailey (Air Force), Justin (Air Force) and Tate (Air Force) as well as her brother-in-law Kermit (Army, Retired).
Memorial Contributions may be made to the Lamar Area Hospice, Rocky Mountain Cancer Center or to Juniper Village direct or in care of the funeral home office.
To order memorial trees or send flowers to the family in memory of Lois E. Tyree, please visit our flower store.