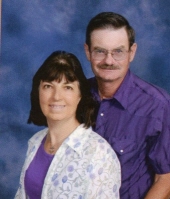 A celebration of Life for longtime Hartman resident, Les Palmer will be held at 1:00 PM Saturday October 29, 2016 at the Lamar Christian Church with Ian Blacker officiating.  In-Urnment will follow in the Hartman Cemetery in Hartman, CO.

Per Les’ request, cremation has taken place and there will be no public visitation.

Les Palmer was born on January 14, 1956 in Wala Wala, Washington to Clement Fulton Palmer and Agnes Lucille Timm-Palmer and departed this life on Saturday October 22, 2016 at his home in Hartman with his family by his side at the age of 60.

Les was preceded in death by his son – Irvin Palmer; by his father – Clement Palmer; and by four siblings – Timm, Dorthea, Christina, and Rhoda Palmer.

Les is survived by his wife Esther of the family home; two children – Nathan (Sara) Palmer of PA; and Letitia (Dan) Echols of Wild Horse, CO; by four grandchildren – John Palmer, Chasity Echols, Carylyn Palmer, Zoe Echols; by his mother Agnes Palmer of PA; siblings – Sandy Palmer of PA; Lydia Chowning of South America; JoAnna Chapman of Indiana; Andy Palmer of Hartman; Julia Vazquez of NJ; and Zanetta Saine of Arkansas; and by one sister-in-law – Sharon Palmer of OH as well as by numerous other relatives and a host of friends.

Those desiring may make memorial contributions to the Lamar Area Hospice either directly or through the funeral home office.
To order memorial trees or send flowers to the family in memory of Les Palmer, please visit our flower store.