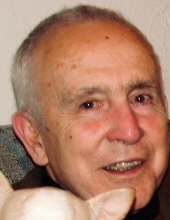 Leo Amaya
A remembrance service for longtime Lamar resident, Leo Amaya will be held at 10:00AM on Saturday, January 12, 2019 at the Life Center Foursquare Church with Pastor Manuel Tamaz officiating.

Per Leo’s request cremation will take place and there will be no visitation.

Leo was born on January 12, 1930 in Santa Cruz, California to Clarence and Mabel (Kidder) Amaya and passed away on December 8, 2018 at the Parkview Medical Center at the age of 88.

Leo is the second of six children. During WWII, he helped support the family by raising and selling rabbits and by caddying at the Pasatiempo Golf Club. He graduated Santa Cruz High in 1948 and attended Coalinga Jr. College until he was drafted into the US Marine Corp from 1952 to 1954. Leo was on inactive duty until 1959. He moved to Denver, Colorado in 1954 and married Carmen (Martinez) Amaya in 1957. They moved the family to Lamar, Colorado in 1971. After 25 years he retired from Isabell Kent-Oakes Dry Goods Company and started Amaya’s Monograms Plus in 1983. They relocated to Pueblo, Colorado in 2013. He was also an avid golfer who played some amazing courses throughout the US. He passed this love on to his whole family.

He is preceded in death by his parents, Clarence and Mabel Amaya, siblings, Gloria, Buddy, Wayne and Mel and his grandchildren, Grace and Gabriel.

Memorial contributions may be made to the Care Net Pregnancy Center in Lamar either direct or in care of the funeral home office.
To order memorial trees or send flowers to the family in memory of Leo J. Amaya, please visit our flower store.