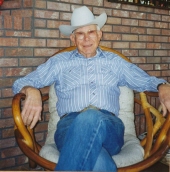 Leo F. Sharp
A service of Celebration for lifelong McClave/Wiley resident, Leo Sharp was held at 11:00 AM on Friday, December 21, 2012 at the Peacock Family Chapel with Pastor Calob Rundell of the Wiley United Methodist Church officiating. Interment followed at the Fairmount Cemetery in Lamar, Colorado.

Leo Forgey Sharp was born on February 7, 1925 in Lamar, Colorado to Don L. Sharp and Velma M. (Forgey) Sharp. Leo passed away on December 16, 2012 at the homeplace in McClave, Colorado at the age of 87 with his family by his side. Leo served on numerous boards and committees in McClave and Wiley area. His greatest love was being a farmer and rancher and enjoying the love of his life, Mildred and family.

He is preceded in death by his parents Don L. Sharp, father and mother Velma M. Sharp.

The family request in lieu of flowers, memorial contributions may be made to Wiley Methodist Church and/or Lamar Area Hospice.
To order memorial trees or send flowers to the family in memory of Leo F. Sharp, please visit our flower store.