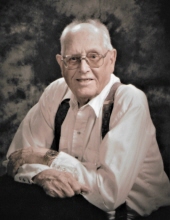 A celebration of life funeral service for longtime Lamar resident, Lee W. Graves, will be held at 10:00 AM Monday July 22, 2019 at the Lamar Missionary Baptist Church with Pastor Travis Horn officiating. Burial will follow in the Veterans Section of Fairmount Cemetery with full military honors by the local VFW.

Lee attended grade school at Farry and Fair Valley and graduated from High School at Freedom, Oklahoma. He then came to Wiley, CO where he worked in an alfalfa mill and later then Lamar Flour Mill.

Lee was inducted into the United States Army during WWII on March 5, 1943 and received his basic training in Fort Sill, OK in field artillery 105 mm Howitzer battery. After completing his basic training, he was sent to the Panama Canal Zone where he joined the 3313 Quartermaster Truck Company as a truck driver hauling supplies. After seven months the company was replaced by a Puerto Rican company and came back to the US for additional training and then he was sent to England and later to France and Germany. Lee’s rank was Technician Fifth Grade. He left Bremerhaven, Germany on March 17, 1946 for the US and received an honorable discharge on April 3, 1946 at Leavenworth, KS. Lee’s decorations were Expert Rifleman’s badge, American Theater Campaign Medal, European African Theater Campaign Medal, WWII Victory Medal, Good Conduct Medal and Honorable Service Lapel Button.

Lee was untied in marriage to Clara Marie McCracken on June 26, 1944 at Bird City, KS. To this union were born twin sons – Donald Lee and Ronald Dee Graves and sons William Louis and Rodney Dean Graves. This marriage was dissolved in 1960. On January 11, 1963 Lee married Betty Jean Koehler Mead who departed this life on December 29, 1985 after a long battle with cancer. On May 8, 1988 Lee married Mable Florence Fuller Suhler.

After returning from the Army, Lee worked for farmers in the Lamar and McClave areas until January 1960 when he went to Leadville, Colorado and hired on with the Climax Molybdenum Co. Mine. He entered their three-year electrical training program and at the time when he took early retirement, March 30, 1975 because of his wife’s health, he was supervisor of the underground locomotive shop. He then returned to Lamar, CO to manage his rental houses. Lee worked for Peery Electric Co. and then for High Plains Electric Co. as a Journeyman Electrician until 1996.

As a teenager Lee enjoyed hunting jack rabbits with his .22 caliber rifle in the sand hills one mile south of his home. The county paid a bounty of five cents per pair of rabbit ears. He also liked to play baseball and later turned to bowling for recreation and has continued since. For the past several years he has made several types of very nice hardwood household items in his workshop. These items were given to children, grandchildren, and some of his close friends.

Lee came to accept the Lord Jesus Christ as his savior during evangelistic meetings in a little country school house when he was thirteen years old. Since his return from the Army Lee has been quite active in the churches where he had his memberships.

Lee was preceded in death by his parents; by one brother – John Floyd Graves as well as by three step children.

Those desiring may make memorial contributions to the Lamar Missionary Baptist Church, the American Cancer Society, or to the Lamar Area Hospice either directly or through the funeral home office.
To order memorial trees or send flowers to the family in memory of Lee W. Graves, please visit our flower store.