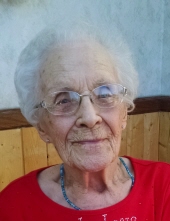 LaVerne Oliver was born on March 16, 1914 in Lewis, Kansas to William Means and Effie Davis-Means and departed this life on Monday June 4, 2018 at the Lamar Estates at the age of 104.

LaVerne was preceded in death by her parents; by her husband Joe Oliver on December 29, 1987; by two brothers – Harold Means and Glenn Means and by one sister – Evelyn Curran.

LaVerne is survived by two children – Patricia Oliver of Lamar and Larry (Lois) Oliver also of Lamar; by four grandchildren; five great grandchildren; and four great-great grandchildren as well as by Drema Ellis of California; by a sister-in-law – Ellen Means and by a niece and nephew and a host of friends.

The family respectfully requests that in lieu of flowers memorial contributions may be made to the Lamar Estates either directly or through the funeral home office.

Peacock Funeral Home is in charge of arrangements for LaVerne Oliver.
To order memorial trees or send flowers to the family in memory of LaVerne Oliver, please visit our flower store.