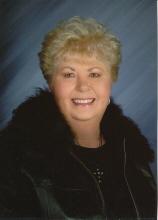 A Celebration of Life for longtime Lamar resident Judy Nolder was held at 2:00 PM, Monday, January 7, 2013 at the Peacock Family Chapel with Pastor Jayde Austin Duncan of the Freedom Church of Colorado Springs officiating. Interment followed in the Fairmount Cemetery in Lamar.

Judith Kay Nolder was born on March 13, 1943 in Wichita, KS to SV (Junior) and Doris Hixson.  Judy lived with her parents in Wichita until 1947, when the family moved to Lamar, CO.  She had a wonderful childhood, growing up the firstborn of 3 children.  They were, and still are, a close knit family, and she fondly recalled her Dad’s siblings coming over for dinner every Sunday, or traveling to Syracuse, KS to see them.  She attended modeling school during her teenage years, and modeled for several dress shops during fashion shows.  Art and design became an evident gifting of Judy’s early on, and she would often draw and paint, gaining awards and recognition for her gift of creative expression.  She attended Lamar Schools until she graduated from Lamar Union High School in 1961.

Judy began dating Monty Nolder during her sophomore year in high school.  Their first date is documented in her wedding album, and reads “It was such a wonderful night, I shall never forget as long as I live”.  Monty drove a red Ford convertible during high school, which Judy took the liberty to drive around the football field during football practice.  They would later marry, after Judy graduated from high school, on October 8, 1961.  For their honeymoon, Monty and Judy went to the mountains to scout elk for Monty’s upcoming elk hunting trip, which would eventually lead to a lifetime of wild game meal preparations for Judy.   2 children were later born to this beautiful union, Alisha Gail and Chad Monty Nolder.  Judy would train her children up in the same faith that she so passionately believed in, and was a fierce defender of her family.   Child rearing and managing the ranch home was no simple task, yet she managed to raise them with ease, and as Psalm 128 says, she truly fulfilled this role… “Your wife shall be like a fruitful vine in the very heart of your house.  Your children like olive plants all around your table.” Judy’s table was surrounded by her husband, children, and grandchildren who all share her sincere Christian faith.  Because of this, her legacy of faith and wisdom will be passed on for generations to come.  One of her truest gifts was the crown of wisdom that she wore with humility and purity.

Judy built a life ranching with Monty 20 miles south of Lamar, and during that time she also drove a school bus for 10 years, worked at the Gingerbread House, and Ivalene’s, and Carla’s Dress Shop in Lamar.   She dedicated her life to her husband and children, and making their place a true “home” in every sense of the word.   Home cooked meals, sometimes prepared at 3am, were also one of her best attributes, and she made certain that her family and guests were always fed very well.  She was a beautiful seamstress, and sewed all of her children’s clothes for several years.  She was especially passionate and skilled at landscaping her yard, interior design, and being involved in the actual work of building projects.   Everything that Judy touched turned beautiful, and was graced with a special touch and serious thought.  This came as no surprise, because her natural grace, beauty and elegance were evident in her appearance and personality.  Her and Monty spent many seasons landscaping their yard to perfection.   Hours would turn into weeks, and weeks would turn into months as she considered a new addition to the home, decorating scheme, or landscape idea…  It was always serious business, and design plans would sometimes change right in the middle of a project.  But at the completion of every project she worked on, it was evident that her love for interior design, beautiful flowers, and creating a sanctuary of peace and tranquility for her family reflected the awesomeness and beauty of her wonderful Maker…

During the early 1970’s, Judy was very active in a Christian Women’s Fellowship named Aglow.  During her time spent with this very special group of women, many life long friendships were formed.  Some of these friendships were celebrated several times a year during birthday luncheons with several of Judy’s dearest friends.   She would bring delight to a weekend shopping trip with her friends and daughter, a coke on a Sunday afternoon, and holiday gatherings with family members.

Judy served as President of Aglow for a time, and the work of her Lord and Savior was apparent throughout her entire life, but during this particular season, Judy was stirred and used by the Lord in a powerful way that affected many lives.  As her faith got bigger, those close to her got better. She would share her faith with many over the span of her lifetime, and become a pillar of strength for her close friends and family.  Although she experienced physical trials in her later years, Judy remained strong and true to her beliefs, and would continue to inspire those closest to her.  She was a loyal friend who shared burdens willingly and prayerfully, and was an encourager to those who were walking through difficult valleys.    Her heart and spirit communicated the passage in Psalm 8:9 which says, O Lord, how majestic is your name in all the earth..  Whenever Judy spoke about Jesus, she truly revered His name.  It was if she was holding His face in her very hands.  Well, now… She is…  Some of the passages highlighted in her bible express her heart better than our words are able…

Acts 2:24… “And you will receive the gift of the Holy Spirit.  The promise is for you and your children and for all who are far off – for all whom the Lord our God will call.”
John 14:10… “I am the way and the truth and the life.  No one comes to the Father except through me.”

Judy departed this life on December 31, 2012 with family and friends by her side, and with powerful expressions of thankfulness, love, affirmation, and hope spoken.   She will be fondly remembered as a family matriarch who poured out her life to her husband, children, friends, and those who needed hope and redemption.   She is survived by her husband Monty Nolder, daughter Alisha (Marvin)Gruenloh , son Chad (Lisa)Nolder, sister Gail (Brian) Heath, brother George (Pricilla)Hixson), grandchildren Kameron Nolder, Jordan Nolder, Hayden Nolder, Bart Gruenloh, and Ross Gruenloh.  She is also survived by several nieces and nephews.   She is preceded in death by her father SV (Junior) Hixson, and infant grandson Jared Gruenloh.

Memorial contributions may be made to the Southeast Colorado Cancer Initiative and/or Lamar Area Hospice either direct or in care of the funeral home office.
To order memorial trees or send flowers to the family in memory of Judy Nolder, please visit our flower store.