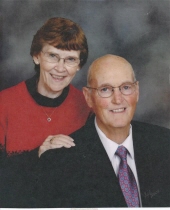 A Celebration of Life for longtime Lamar resident, Joyce I. Grice was held at 2:00 PM, Friday, August 3, 2012 at the Lamar First Baptist Church with Reverend Dave Davis officiating. Interment followed at Fairmount Cemetery in the Veteran’s Section.

Per Joyce’s request there was no public viewing.

Mrs. Grice was born on September 14, 1938 at May Valley, Colorado to Warren Vernon and Maggie Bell (Ausmus) Marriott and passed away at the Holly Nursing Care Center on July 31, 2012 at the age of 73.

She is preceded in death by her husband J.B. Grice on September 17, 2005, parents and her brother Larry Marriott.

Joyce is survived by her son Craig (Linda) Grice of Lamar and a daughter Lori (Mike) Green also of Lamar. She is also survived by her grandchildren; Michael, Andrew, Bryana, Amber (John) Young and Colton as well as her siblings; Donald (Dottie) Marriott of Atascadero, CA, Dorothy (Sam) Hall of Lamar and her sister-in-law Shirley Marriott also of Lamar. Numerous other relatives and many friends also survive.

Memorial Contributions may be made to the Lamar First Baptist Church either direct or through the funeral home office.
To order memorial trees or send flowers to the family in memory of Joyce I. Grice, please visit our flower store.