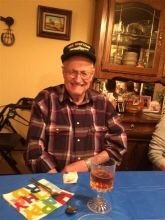 A celebration of life for longtime Lamar resident, John P. Quattlebaum was held at 10:00AM on Saturday, December 26, 2015 at the Peacock Family Chapel with Pastor Harold Bohl officiating. Interment followed in the Veteran’s Section at Fairmount Cemetery.

John was born on January 24, 1927 in Seward County, Kansas to Bryan Reynolds and Gladys May (Daniels) Quattlebaum and passes away on December 22, 2015 at the Holly Nursing Care Center at the age of 88.

He is preceded in death by his parents and his brother, Gerald Quattlebaum.

John is survived by his wife, Viola Quattlebaum of the family home in Lamar; children, Lana (Jim) Lococo of Pueblo; Jane (Greg) Everhart of Albuquerque, NM; Debra Quattlebaum and Anita (Darrell) Roth all of Lamar; ten grandchildren and sixteen great-grandchildren. He is also survived by his sister, Betty Frier of Johnson, KS as well as numerous nieces, nephews, cousins, other relatives and a host of friends.

Memorial contributions may be made to the Lamar Area Hospice and/or Alzheimer’s Association either direct or in care of the funeral home office.
To order memorial trees or send flowers to the family in memory of John Quattlebaum, please visit our flower store.