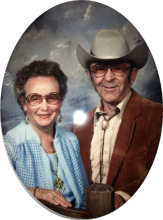 Joan Thompson
A Celebration of Life for longtime Lamar resident, Joan Thompson was held at 4:00PM on Saturday, January 3, 2015 at the Peacock Family Chapel with Ray Matteson officiating. Interment was held on Monday, January 5, 2015 at 1:00PM at the Fairmount Cemetery.

She is preceded in death by her husband; Grover E. Thompson, her parents, siblings; Imogene Osborn and Wilbur J. Choat.

Joan is survived by her children; Cody Laughlin of Lamar, Grover F. (Tani) Thompson of Collbran, CO and Pat (Roger) Givigliano of Trinidad, CO, eight grandchildren, fourteen great-grandchildren and four great-great-grandchildren. She is also survived by her siblings; A.J. (Betty) Choat of Lamar and Vernon (Dixie) Choat of Granada as well as numerous nieces, nephews, other relatives, friends and her special friend; Vivian Ply.

Memorial contributions may be made to the Second Chance Animal Rescue and/or L.A.S.T. either direct or in care of the funeral home office.
To order memorial trees or send flowers to the family in memory of Joan Thompson, please visit our flower store.