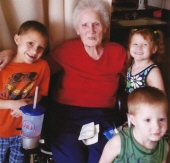 Joan Ruth Cooper
A graveside memorial service for current Lamar resident, formerly of Holly, Colorado, Joan Ruth Cooper was held at 10:00AM on Friday, April 22, 2016 at the Fairmount Cemetery in Lamar with Ray Matteson officiating.

Per Joan’s request cremation has take place and there will be no visitation.

Joan was born on April 27, 1934 at Bristol, Colorado to Joseph and Anna (Klofenstein) Bumann and passed away on April 2, 2016 at The Legacy in Lamar with her family by her side at the age of 81.

She is preceded in death by her first husband, Albert Darbyshire; second husband, Darrell Cooper; daughter, Carol Darbyshire; her parents, and her siblings, Terri Bumann; Timothy Bumann and Helen Jones.

Memorial contributions may be made to the Lamar Area Hospice and/or Holly Nursing Care Center either direct or in care of the funeral home office.
To order memorial trees or send flowers to the family in memory of Joan Cooper, please visit our flower store.