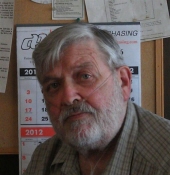 A celebration of life memorial funeral service for longtime Lamar resident, Jim DeLoach, was held at 2:00 PM Friday December 27, 2013 at the Peacock Family Chapel in Lamar.  Ian Blacker of the Lamar Christian Church will officiate the service and burial followed in the veteran’s section of Fairmount Cemetery in Lamar with full military honors by the Lamar V.F.W. Post # 3621.

Jim was born on November 18, 1938 in Garden City, Kansas to Ethel (Burton) and Hoyt S. DeLoach and departed this life on Tuesday December 24, 2013 at his home in Lamar with his family by his side at the age of 75.

Mr. DeLoach is preceded in death by his parents and by one nephew Jeffrey Riley.

The family respectfully requests that in lieu of flowers, memorial contributions be made to the Jim DeLoach Memorial Fund in care of the Peacock Funeral Home.
To order memorial trees or send flowers to the family in memory of Jim DeLoach, please visit our flower store.