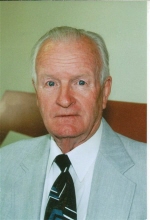 A Mass of Christian Burial for longtime Lamar Judge and Attorney, the Honorable George McLachlan was held at 10:00 AM, Saturday, February 2, 2013 at St. Francis de Sales/Our Lady of Guadalupe Catholic Church in Lamar. Interment followed with full Military Honors under the auspices of the Lamar VFW Post #3621 and the Lamar American Legion Post #71 at Fairmount Cemetery.

The Hon. McLachlan was born on October 31, 1923 at Denver, Colorado to George and Elizabeth Raphaella (Gorman) McLachlan, Jr. and passed away at Juniper Village on Friday, January 25, 2013 at the age of 89.
George is preceded in death by Elizabeth “Libby” McLachlan on November 27, 1995 as well as his brother Jack McLachlan and his parents.


Memorial Contributions may be made to the Juniper Village of Lamar either direct or in care of the funeral home office.

Following high school graduation, George enlisted in the United States Navy on July 2, 1942 serving his country until he was honorably discharged on December 11, 1945. George then re-enlisted with the United States Marines Corps Reserves on October 13, 1950 serving and being honorably discharged as a Corporal on March 24, 1958.
To order memorial trees or send flowers to the family in memory of Hon. George McLachlan, please visit our flower store.