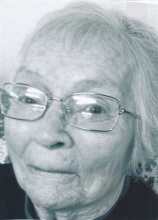 Funeral services for lifetime Holly and Granada resident, Helen M. Seal was held at 10:00 AM Tuesday, May 14, 2013 at the Peacock Family Chapel with Pastor Eugene Birt with the Holly First Church of the Nazarene officiating. Interment followed at 11:30 AM May 14, 2013 at the Coolidge Cemetery in Coolidge, Kansas.

She is preceded in death by her parents, husband Edwin B. Seal, Eight brothers and sisters as well as 3 grandchildren.

Memorial Contributions may be made to Helen M. Seal memorial fund in care of Peacock Funeral Home.
Helen always had a big smile and a willing hand for all she met. She enjoyed all babies, but especially her grandchildren and great-grandchildren.

Helen loved country music and going to dance and dancing EVERY dance.

One of her favorite songs was Tennessee Waltz. She LOVED fiddle music.

She worked several years in the lunch rooms in Granada and Holly. She owned
The Seal Café in Holly until it burned. She also cooked in several cafes in the area.

Many have said she made the best homemade bread, cinnamon rolls and pies anywhere around.

She was a resident in Holly Nursing Care Center for the past few years.

She loved pulling pranks and could take them as well as give them.

Her motto was “Smile” Keep busy and always smile, it may not make you feel better but it will everyone else.

She will be sorely missed.
To order memorial trees or send flowers to the family in memory of Helen M. Seal, please visit our flower store.