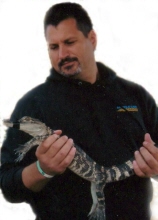 A funeral service for Broomfield, CO resident, Heath Lee Peck was held at 10:00AM on Friday, June 22, 2012 at the Peacock Family Chapel with Randy Caddell officiating. Interment followed at Riverside Cemetery.

Lee was born on November 21, 1970 at Garden City, Kansas to Glen Edward and Shirley Louise (Longworth) Peck and passed away on June 16, 2012 at his home in Broomfield, Colorado at the age of 41.

He is preceded in death by his father- Glen Peck and by two brothers - Vernon E. Peck and Robert W. Peck.

Lee is survived by his wife – Tameria Peck of Broomfield, CO; by his children- Stacey Peck, Brandon Peck and Marcus Millwood all of Broomfield, CO; and Desirae Millwood and her fiancé Jason Cetlinski of Thornton; by his mother – Shirley Peck of Garden City, KS, by his brothers - Billy J. (Brenda) Peck of Lansing, KS and Danny G. (Marlyne) Peck of Dodge City, KS; by and Ex-son-in-law – Justin Towers of Thornton, CO; two Grandchildren – Jayden and Charlie; by one aunt Eunice Manley of Park City, Montana; and by two uncles – Eldon Longworth of Lamar and Garry (Linda) Longworth also of Lamar; also surviving are numerous nieces, nephews, cousins, other relatives, and a host of friends.
To order memorial trees or send flowers to the family in memory of Heath Lee Peck, please visit our flower store.