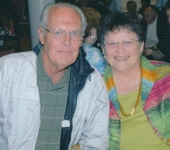 Guyla Jean Tempel was born on September 22, 1939 in Lamar, Colorado to Guy and Dorothy (Davidson) Coffey and passed away on December 12, 2012 at the home of her daughter in May Valley at the age of 73 with her family by her side. Guyla, who was named after her father Guy, was greeted by her older brother Wallace and older sister, Kathryn after coming home from the hospital. As Wallace was 10 years older and Kathryn was 4 years older, Guyla tried hard to keep up with her older siblings. Guyla spent most of her childhood living in the Big Bend Community in a two story farmhouse with six bedrooms and a full basement. Her father raised turkeys and lambs and she was proud that her father bought the family farm with money raised by selling those turkeys. Some of her recollections included spending summers riding her bike with her sister and helping out her mother in butchering turkeys in the fall. In high school, she was named the Colorado Turkey Grower’s Sweetheart and presented a turkey to the Colorado governor for Thanksgiving.

When Guyla was six, she talked her mom into learning the piano. Music gave her lots of pleasure throughout the years and brought her much spiritual comfort. She played the organ for church beginning in her high school years and throughout her life, and over the years gave many piano lessons to children of family members, neighbors and friends. In high school, she was a member of a singing trio along with Nikki Reed and Renee Dotson Dilts, who performed at many local events.
Guyla graduated valedictorian from Wiley High School in 1957 and attended Colorado State College where she received a Bachelor’s Degree in elementary education in 1961. She was a proud member of the Delta Omicron honorary music sorority as well as Alpha Gamma Delta social sorority. She remained lifelong friends with her Alpha Gamma Delta sisters and would often meet with them at events and reunions.

After graduating from college, Guyla began teaching the 4th grade in Chicago for two years. While she was there, she enjoyed spending her weekends visiting her sister in Iowa as well as attending the Chicago symphony, of which she held season tickets. She also developed a love of attending the theater and plays while in Chicago. While in college her sweetheart, Loren Tempel, proposed and she accepted his offer to begin a life in Big Bend, Colorado.
She married Loren Tempel in July 1963 at the Wiley Methodist Church when it was 103 degrees with no air conditioning in the church. After a honeymoon cut short due to the need for Loren to return because of a run of irrigating water, Guyla began teaching that following fall at Lincoln Elementary in Lamar, Colorado and continued for two years. Guyla and Loren began a family with the arrival of Curtis Brian in 1966. She recalled that he was born on a Saturday night and at time when fathers weren’t allowed to be in the delivery room, he watched the birth. They welcomed a daughter, Coleen Lauren on Feburary 14, 1970 in Lamar. Guyla considered her to be a Valentines gift from Loren. Guyla recollected that she could hardly wait to start sewing cute little dresses to dress her in.

Even though she struggled with adversity due to a back injury in 1975 and the development of cancer in 1995, she remained a constant factor in her children’s and grandchildren’s lives. She often spent weekend afternoons and school holidays reading, cooking, playing games and laughing with her children and grandchildren. She was a notable cook and her holiday meals were well welcomed by her immediate and extended family. She looked forward to the many visits by her sister’s family (Luebe bunch) during the summertime growing season. She stated that if one wants a serene vacation, coming to an irrigated farm in the summertime was not recommended. The Luebe kids learned to appreciate the uniqueness of farm life as they visited throughout the years. Also during the summer, Jonas would visit from Denver. His arrival always brought humor and silliness to this serious time of year.

Guyla and Loren were excited to become grandparents. When Amber was born early, Guyla was deeply involved in her care and as she grew they shared their joy of music together. She was thrilled when Amber spent a summer in Europe touring with the honors band. She was again excited when five years later her first grandson Zane was born. They spend many afternoons together baking and talking in the kitchen. She was especially proud of his hunting and love of outdoors. When Lauren Tinnes was born a year later, Guyla was excited to finally have someone share her love of American Girl dolls. They spent a memorable trip to Chicago to visit the American Girl Headquarters as well as see the sights. When Luke Tinnes was born five years after Lauren, Guyla was extremely proud as she finally found her perfect game loving partner. She loved the sound of his giggle and his light-hearted approach to life. Guyla was excited and surprised when Erin joined the troupe 6 years later. Guyla enjoyed sharing her love of reading to Erin by reading favorite storybooks with her. Even in the midst of her illness, she shared playing the piano with Erin and was excited for her to begin lessons. This last July she was elated to receive the news of Jonas’ daughter, Leighton. She looked forward to including her into her troupe of grandchildren.

Guyla was extremely happy when Amber married Shane Irving in March of 2012. She was overjoyed to learn that she would be a great-grandmother this coming spring.

Guyla and Loren enjoyed traveling together. They visited England, Central America, Alaska, Hawaii, Florida, and New England to see the fall colors. Guyla was married to Loren until his sudden passing on their 45th wedding anniversary in 2008. After Loren’s passing, she visited New York City in 2009 with her older granddaughters, Coleen, and Mickey Tinnes. Guyla was also able to accomplish her lifelong dream of seeing the penguins in South America with Curtis’s family in 2010. Even though she missed Loren, she remained active in the Rosette Club, PEO and church family. She played piano at church until her illness prevented her from continuing.

Guyla is survived by her two children: Curtis (Cathy) Tempel of Big Bend and Coleen (Danny) Tinnes of May Valley; by 6 grandchildren: Lauren and Luke Tinnes, Amber (Shane) Irving, Zane and Erin Tempel, and Leighton Tempel. She is also survived by her brother-in-law, Gale Tempel of Big Bend; sister-in-law, Marilyn Luebe of Clinton, IA; nieces: Carolyn Luebe of Clinton, Iowa, Sue (Nick) Thompson of Cedar Falls, Iowa; nephews: Jim (Beth) Luebe of Colorado Springs, Ed (Christine) Luebe of Cedar Rapids, Iowa, Adam (Staci) Tempel of Haxtun, CO, Jake (Cherie) Tempel of Big Bend, and Jonas (Carrie) Tempel of Denver; and niece Gayle Crawford of Lamar. She is also survived by numerous other relatives and many friends.
Those desiring may make memorial contributions to the Wiley United Methodist Church and/or Lamar Area Hospice either direct or in care of the funeral home office.
To order memorial trees or send flowers to the family in memory of Guyla Tempel, please visit our flower store.