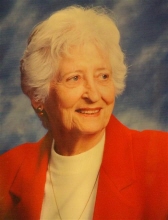 Geraldine Loree Weakley (known as Jerry) was born on January 25, 1920, in Ridgely,
West Virginia, to Hallie Mae and Norman C. Weakley. The youngest of four children, Jerry grew up in Ridgely and
Cumberland, Maryland. She graduated from
Allegheny
High School in
Cumberland in 1938, playing several sports. Jerry attended
Lincoln
Memorial
University in
Harrogate, Tennessee, on a basketball scholarship, working at various University jobs to supplement the scholarship until her graduation in 1942.

While there, she became acquainted with John C. Statler, whom she had known slightly in high school. When he was inducted into the army, they married on November 15, 1941. After the war, they lived in Ypsilanti, Michigan while John attended law school and Baltimore, Maryland, where he was a trust officer at a bank. In 1948, John became a junior partner to Alfred Todd, in
Lamar, Colorado. Jerry lived in Lamar until her death on December 10, 2016.

Jerry was active in the

United
Methodist
Church, serving as the President of the United Methodist Women and as an assistant Sunday School Teacher. She was a Cub Scout Leader, served on the Girl Scout Council, was a founding member of the Federation Club Inter Sese, and was a member of P.E.O. She was President of the Washington Elementary School PTA, a Dudes and Dames Set Mother, and assisted in financial drives for the American Cancer Society, the American Heart Society and the

She loved to play bridge and Jokers Marbles; played golf and was an active walker for many years; enjoyed hand work, digging in her flower garden and water aerobics.

In lieu of flowers, please donate to the Lamar United Methodist Church or a charity of your choice.
To order memorial trees or send flowers to the family in memory of Geraldine Statler, please visit our flower store.