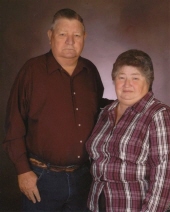 A Mass of Christian Burial for Wiley resident, Gerald M. Fleshman was held at 10:00AM, Thursday, February 28, 2013 at the St. Francis de Sales/Our Lady of Guadalupe Catholic Church with Reverend Henry Aguwa as celebrant. A Rosary was held prior to the Mass at 9:30AM with Deacon Henry Wertin reciting. Interment with full Military Honors followed at Fairmount Cemetery in the Veteran’s Section with the Lamar VFW Post #3621 and Lamar American Legion Post #71.

Visitation for Gerald was held on Wednesday, February 27, 2013 from 1:00PM until 5:00PM at the Peacock Family Chapel.

Gerald is preceded in death by his parents, sisters; Edith Ross, Edna Ross and Marie Roberts as well as his brothers; Glen Fleshman, Emery Fleshman, Bob Fleshman and Jim Fleshman.

He is survived by his wife Dianne of the family home in Wiley, children; Darren (Rhonda) Fleshman of Lamar, Marala Ortiz of La Junta and Frank Ortiz, and Mark (Melony) Fleshman of Lamar. Gerald is also survived by his grandchildren; Justin and Talina, Layne and Tanisha, Cory, Christina (Aaron) Sandoval, Colby and Danica, great-grandson: Alias Orien Sandoval as well as his sister; Blanche Service of Enid, OK other relatives and many friends.

Memorial Contributions may be made to the Lamar Area Hospice either direct or in care of the funeral home office.
To order memorial trees or send flowers to the family in memory of Gerald M. Fleshman, please visit our flower store.