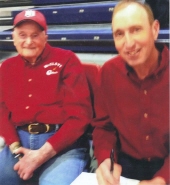 George B. McClave
A Celebration of Life for lifetime McClave resident, George McClave was  held at 10:00 AM, Saturday, August 9, 2014 at the Lamar Missionary Baptist Church with George’s son-in-law, Rev. Tim Parish of the Grace Baptist Church of Ely, Nevada officiating. Interment followed at the McClave Cemetery in McClave, Colorado.
Visitation for George was held on Friday, August 8, 2014 from 1:00 PM until 7:00 PM at the funeral home. The McClave family received friends from 5:00 to 7:00 PM.
George was born on August 26, 1927 at Lamar, Colorado to Thelma (Baker) and George Shepard McClave and passed away in Pueblo, Colorado on Tuesday, August 5, 2014 at the age of 86.

George graduated from McClave High School in 1946. He excelled in track, winning state and setting the record in the mile run in 1945 and 1946. He served in the United States Army in Korea from 1946 to 1948. He attended Colorado A&M in Fort Collins, majoring in Animal Husbandry, before returning to the family farm.

George's life-long passion was farming and ranching. Although he lost an arm in a farming accident 40 years ago, he continued to actively farm with his son, Dale, until his death.

George served on several county committees. He enjoyed bowling and family vacations visiting all 48 states. He was an active member of the Lamar Missionary Baptist Church in Lamar.
Mr. McClave is preceded in death by his parents, his son Don Scott McClave, sisters; Madelyn Colmey and Barbara Arther and his son-in-law Jim Brown.
He is survived by his wife Winniecita ­McClave of the family home in McClave, children; Dianne Brown of Independence, MO,  Debbie (Jay) Shearer of Elizabethtown, Pennsylvania,  Dale (Sandra Wilson ) McClave of McClave and Shirley (Tim) Parish of Ely, Nevada. George is also survived by 15 grandchildren, 3 great grandchildren, his brother John (Deborah) McClave of Pueblo, CO as well as numerous nieces, nephews other relatives and many friends.
Memorial contributions may be made to McClave High School Athletic Fund either direct or in care of the funeral home office.
To order memorial trees or send flowers to the family in memory of George B. McClave, please visit our flower store.