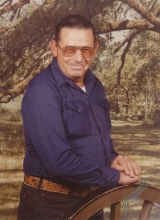 A Celebration of Life for longtime Lamar resident Clarence “Gene” Conner was held at 11:00AM on Monday, December 10, 2012 at the Peacock Family Chapel with Pastor Harold Bohl of the First Southern Baptist Church officiating. Interment followed at Fairmount Cemetery in the Veteran’s Section.

Per Gene’s request there was no public viewing.

Gene was born on October 7, 1932 at Galatea, Colorado to Clarence Henry and Lena Jane (Ford) Conner and passed away on December 5, 2012 at Parkview Medical Center in Pueblo, Colorado at the age of 80.

He is preceded in death by his parents, siblings; Arlene Brower, Carol Greenwell, Ruth White, Bob Conner and Cloyce Conner.

Gene is survived by his wife; Doris Conner of the family home in Lamar, children; Dale Conner of Lamar and Geri Mullins of Vega, Texas, grandchildren; Justin, Bradley and Travis Mullins, and great-grandchildren; Scott, Wesley and Ava. He is also survived by other family and a host of friends.

Memorial Contributions may be made to the Lamar Area Hospice either direct or in care of the funeral home office.
To order memorial trees or send flowers to the family in memory of Gene Conner, please visit our flower store.