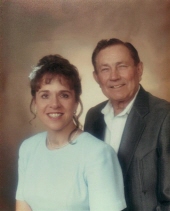 Gene was born August 17, 1933 at Lone Star, Arkansas, which garnered him the nickname “Arkie” and he had a belt which said so.
He was the second child of Earl and Ellen (Winford) Burton. He was welcomed by his sister; Mary and over the next few years was big brother to Earlene, Robert and Larry.
Gene graduated from McClave High School in 1951. His sports of choice were basketball and baseball. Growing up on the farm gave him mechanical skills which became his means of putting food on the table. He worked for a Ford dealership for many years as a mechanic and then he had his own shop. Tilling soil and raising cattle were also some of his interests.
Gene loved to sing the old gospel favorites and drove many miles to attend singing events. He was an active member of the Granada Church of Christ.
He departed this life on December 22, 2014 at Parkview Medical Center in Pueblo, Colorado at the age of 81, his body worn out, his will to live gone.
Gene was preceded in death by his parents, sister; Mary and brother; Larry.
He is survived by his wife; Sheryl of the family home in Lamar, one daughter; Debbie Owen of Charleston, SC, step-son; Matthew (Sherry) Johnson of Gruver, TX, sister; Earlene Rogers of Greenwood, AR, brother; Robert (Evelyn) Burton of Kingman, KS, numerous grandchildren; two great-grandchildren as well as numerous other family and a host of friends.
A Celebration of Life for longtime Lamar resident Gene Burton was held at 2:00PM on Friday, December 26, 2014 at the Peacock Family Chapel with Robert Burton officiating.
Visitation for Gene was held on Friday, December 26, 2014 from 10:00AM until service time at 2:00PM at the Peacock Family Chapel.
Memorial contributions may be made to the charity of one’s choice either direct or in care of the funeral home office.
To order memorial trees or send flowers to the family in memory of Gene Burton, please visit our flower store.