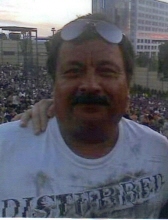 A Memorial Mass for longtime Lamar resident Freddy Qualls was held at 10:00AM on Wednesday, December 17, 2014 at the St. Frances de Sales/Our Lady of Guadalupe Catholic with Father Charlie Sena as celebrant. Inurnment was follow at Riverside Cemetery.

Per Freddy’s request cremation has taken place and there will be no visitation.

Freddy was born on January 10, 1954 at Snyder, Texas to Elevinio and Guadalupe (DeLaCruz) Flores and passed away on December 14, 2014 at the age of 60 with his family by his side.

He is preceded in death by his parents and his brother; David Espinoza.

Memorial contributions may be made to the Freddy Qualls Memorial in care of the funeral home office.
To order memorial trees or send flowers to the family in memory of Freddy Qualls, please visit our flower store.