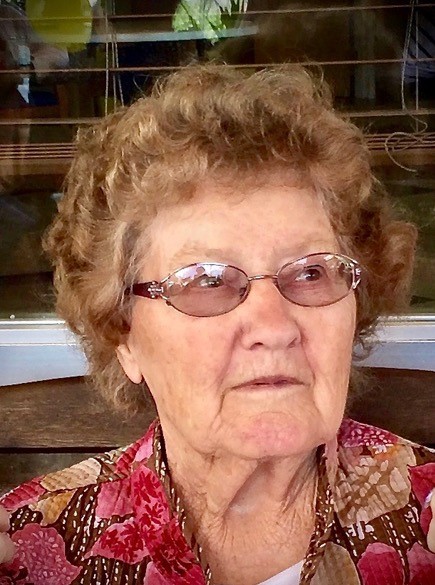 Emma Marie DeBusk, a life-long southeast Colorado resident, departed this life on
September 12, 2016, from the effects of dementia. She died at her daughter's home in
Granada, CO, with her family by her side.

Born on November 1, 1926, and raised on the family farm northwest of Wiley, Colorado,
Emma attended the schools in Wiley. She helped on the farm until graduating from Wiley
High School in 1945 at which time she drove a school bus and worked as a bookkeeper at
the State Bank of Wiley. She married Robert L. Solt on October 13, 1946, and a son, Ronald
Lee Solt, was born. Robert was electrocuted in an on-the-job accident in October, 1947.
On June 4, 1948, Emma was united in marriage to Noble Lee DeBusk in Raton, New Mexico.
From this marriage, four children were born, Eleanor Jean Strong, Gary DeBusk, and twin
daughters, Mary Sue Widener and Cary Jacobs. The family lived and worked farms east of
McClave from 1950 to 1962 and northeast of Lamar from 1963 to 1966 and their most
permanent residence was just north of Lamar from 1967 to 2006.

Emma's interests varied. She assisted with farming and raised her children during the
1950's and worked as a sales clerk at J. C. Penney in Lamar throughout the 1960's.
Although both Emma and Noble became avid bowlers, it was Emma who outshined. She
ran out of space in the wall case she used to display the bowling trophies won at local and
state tournaments. The Lamar Lanes once allowed her to enter the annual "King's
Tournament" and it was the Queen who won.

When Emma and Noble bought their house north of Lamar, Emma's greatest pleasure was
working in the yard. She ordered plants and flowers from mail order catalogs; she hauled
trees from the mountains; she accepted plantings from friends; and she built sheds,
pergolas and lattice walk-throughs from scratch. In the late 1980's, Emma and Noble's
yard won the Lamar Daily News' annual "Beautiful Yard" contest.

In her lifetime, Emma quilted scores of blankets for family and friends and hundreds of
doilies, baby blankets, afghans, and other crocheted items. She must have baked a
thousand blackberry pies from her homegrown blackberries. When she played the
card game, Rook, everyone wanted to be her partner. She enjoyed traveling. Some of her
favorite trips were to West Virginia, Florida, Las Vegas and California. One of her favorite
destinations was the Colorado mountains. She also enjoyed visiting the national parks
where Gary worked. When she began walking for exercise she would walk ten miles a
day. It was enough to become a member of the 1200 Club (1200 miles a year).

Emma will be remembered especially as a mother and grandmother at her happiest when
she was surrounded by her family. Her biggest smiles occurred when she was a part of the
fun-loving group. The entire family often got together at "Grandma and Grandpa's house",
the city park or the lakes for special holidays and summer barbecues. She was a
strong, and strong-willed, woman and a hard and dedicated worker regardless of the job at
hand. Her work was meticulous. She was a member of the Wiley Church of God.

Emma was diagnosed with dementia in 2006. With that and Noble’s death, she sold her
beloved house and yard north of Lamar. She moved to Lamar Manor where she lived for
four years. As her dementia advanced she became a resident at Prairie Pines Assisted
Living Community in Eads; Bent County Health Care Center in Las Animas; and the Holly
Nursing Care Center in Holly. Emma was moved to her daughter Mary Sue’s home in
Granada, CO, where she stayed until her death. She was assisted by the Lamar Area
Hospice.

Memorial donations may be made through Peacock Funeral Home office or directly to the
Lamar Area Hospice Association, P. O. Box 843, Lamar, CO 81052.
To order memorial trees or send flowers to the family in memory of Emma DeBusk, please visit our flower store.