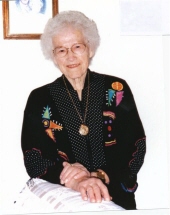 A Funeral Mass for longtime Eads resident, Elizabeth M. Lane was held at 10:00 AM., Tuesday, November 26, 2013 at the St. Francis de Sales/Our Lady of Guadalupe Catholic Church with Reverend Charlie Sena as celebrant. A Rosary was held prior to the Mass on Tuesday, November 26, 2013 at 9:30AM with Deacon Allan Medina. Interment followed at the Fairmount Cemetery in Lamar.

Elizabeth was born on February 16, 1916 at Ellis, Kansas to John and Theresa (Flaxx) Kessler and passed away on November 22, 2013 at Weisbrod Memorial County Nursing Home in Eads, Colorado at the age of 97.

She is preceded in death by her parents, her husband; Worth G. Lane and son; Clyde Lane, grandson; Roger Cooper, great grandson; Rusty Giesbrecht, sons-in-law; Alvin Searl and David Hayes as well as all 20 of her brothers and sisters.

Memorial Contributions may be made to the St. Francis de Sales/Our Lady of Guadalupe Catholic Church either direct or in care of the funeral home office.
To order memorial trees or send flowers to the family in memory of Elizabeth M. Lane, please visit our flower store.