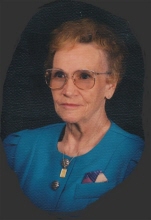 A Celebration of Life for longtime area resident, Dorothy Irene Kinder was held at 10:00 AM, Saturday, August 2, 2014 at the Lamar Christian Church with Ian Blacker officiating. Interment followed at Fairmount Cemetery.

Mrs. Kinder is preceded in death by her husband John Albert Kinder, parents and her two sisters; Myrtle Golden and Helen Chambers.

Memorial Contributions may be made to the Lamar Area Hospice or the Lamar Christian Church either direct or in care of the funeral home office.

Arrangements are under the direction of the Peacock Family.
To order memorial trees or send flowers to the family in memory of Dorothy I. Kinder, please visit our flower store.