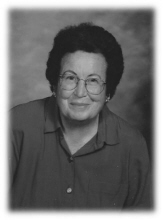 Doris Corrine (Miller) Thompson died on February 25 in Rocky Ford, CO.  She was born on April 27, 1923 in St. John, Kansas to Olive Mabel (Oxley) and Joseph Reeder Miller.  The family moved to Colorado in the mid- 1930’s during the dust bowl and lived on a farm in the McClave/Wiley area.   She married Clarence William Thompson on August 28, 1940 in Syracuse, KS and graduated from Lamar Union High School in 1941.   During the war Clarence and Doris lived in Vineland, CO near the Pueblo Army Air Base and in late 1945 they moved back to Lamar to their home on South 10th Street.
Doris is survived by her three children, Janet (Terry) DeWitt of Lamar, Tom (Kitty) Thompson of Littleton, and Nancy (George) Hutchison of Colorado Springs.  She had nine grandchildren: Wendy (Mark) Root, Misty (Jim) Hablutzel, Dustin (Staci) DeWitt, Heidi (Todd) Grigsby, Todd Thompson, Ryan (Heather) Thompson, Holly Walter, Lance Hutchison, and Amanda (Clinton) Bellingar; and twenty great-grandchildren and one great-great grandchild.  She was preceded in death by Clarence, her husband of nearly 50 years, two sisters and brother, and two great-grand-children.
Doris loved the out of doors and was  right at home camping, elk hunting, fishing, walking a beach, hiking through aspen and columbines, or spending a weekend at the cabin at Two Butte’s Reservoir or a time at a cabin near Creede.  She was a leader of Girl Scouts for many, many years.  She and Clarence were very active Good Sam’s and loved hitching up the trailer and heading down the road.  She was a cook at Lamar Junior College for several years and then worked for seventeen years at Plateau Natural Gas Company.  She loved her vegetable  and flower garden.  Her kitchen produced many, many wonderful meals for family and friends over the years.  She was a very special mother, grandmother, and friend to everyone in “good old Southeast Colorado” as she was fond of saying.
She was a charter member of Grace Lutheran Church in Lamar and her service were held there on Tuesday, March 1, 2016 at 2:00 PM.  She was laid to rest in Fairmount Cemetery following the service.
Memorial Contributions may be made to the Arbor Day Foundation and/or Girl Scouts Troop either direct or in care of the funeral home office.
To order memorial trees or send flowers to the family in memory of Doris Thompson, please visit our flower store.