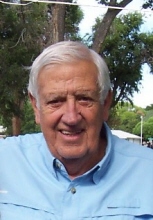 Funeral services for longtime Lamar resident, Don Arlen Holmes was held at 10:00AM, Saturday, August 15, 2015 at The Church of Jesus Christ of Latter-Day Saints. A viewing was held prior to the service from 9:00AM until 9:30AM.  Interment followed at Fairmount Cemetery.

​Don was born on September 30, 1934 in Manassa, Colorado to Charles Everett and Julia Pauline (Huffaker) Holmes and passed away on August 6, 2015 in Pueblo, Colorado at the age of 80.

​He is preceded in death by his parents and sister, Fran Kelly.