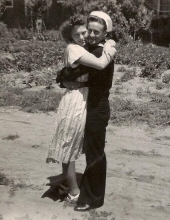 Doloris Jean (Hull) Flower
A celebration of life memorial service for longtime Lamar resident, Doloris J. Flower will be held at 10:00 AM Saturday December 7, 2019 at the Lamar Christian Church with Ian Blacker officiating.

Per Doloris’ request, cremation has taken place and there will be no public visitation.

Doloris Jean Hull, daughter of Elmer C. Hull and Lula J. (Knapp) Hull, was born July 13, 1932 in Bethune, Colorado, and departed this life in her husband’s arms on Tuesday, November 26, 2019, at her home in Lamar, Colorado at the age of 87. Doloris had been battling Parkinson’s disease for many years.
During her childhood, Doloris lived first in Bethune, Colorado and Stratton, Colorado, then moved with her mother and siblings to Burlington, where she attended Burlington schools. In her mid-teens, she met the love of her life, Glenn A. Flower, and they married on June 10, 1949. To their delight, they were blessed by the births of their children, Sherry, Michael, and Brett. Doloris and Glenn moved to Lamar in 1954, where they made their home until her passing.
Doloris’ focus throughout her life was being “Wife, Mom and Grandma”. For many years, she did home child care so she could be at home for her children. Later, she worked at J&N Shoes, then DeLoach’s Tires as Office Manager, where she worked side by side with her husband. Following that, she worked in the accounting department of MDM Services Corporation.
Doloris spoke many times of the ladies who during her childhood took her to the Nazarene Church in Burlington. There she learned to love Jesus. In the mid 1950s, she and Glenn gave their lives to Christ and were baptized in the First Christian Church in Lamar. She remained faithful for the remainder of her life. When the time came she no longer could attend church services in person, she worshipped with them watching their on-line services every Sunday. During her and Glenn’s active years in the church, they led youth groups for the teenagers. Following that, they worked with the Children’s Church Ministry for many years. She holds a special place in the hearts of many who were blessed to have her as a teacher.
After her retirement, she and Glenn traveled – cruising and visiting many countries around the world. As long as health permitted it, she and Glenn, along with good friends traveled “south” every winter in their motor homes, meeting many people and enjoying the warmer winters.
Doloris was a very talented person. There wasn’t anything that she didn’t master - from sewing, knitting, crocheting, art, decorating cakes, then, finally her love for intricate beading. Many people have been recipients of gifts from the work of her hands. She decorated and delivered birthday cakes for all the elderly in her church congregation. It would be impossible to count the people who received her handmade and heartfelt gifts. Even once at the State Fair, someone admired her beaded earrings – she took them off and gave them to a complete stranger (who was very delighted). She had a very giving heart!
Doloris was preceded in death by her parents and siblings – Clarence Elmer Hull, Harvey Louis Hull, Kenneth Lee Hull, Anna Mae Hull, James Leroy Hull, and Darleene Viola (Hull) Winslow.
She is survived by her husband of 70 years, Glenn A Flower; Children, Sherry (Bryan) Settles of Lamar, Mike Flower of Laguna Beach, CA, and Brett (Vicki) Flower of Lakewood, CO; seven grandchildren – Troy (Amber) Settles, Eric (Sarah) Settles, Alexa Flower, Lauren (Will) Flower-Morrison, Zachary (Jamie) Flower, Spencer Flower and Trevor Flower; by seven great grandchildren: Tanner and Alyssa Settles, Anna, Ethan, and Tala Settles, and Everly and Elodie Flower; as well as by numerous other relatives and a host of friends.
Those desiring may make memorial contributions to the Lamar Christian Church either direct or in care of the funeral home office.

Services for Doloris J. Flower are under the direction of the Peacock Funeral Home.
To order memorial trees or send flowers to the family in memory of Doloris J Flower, please visit our flower store.