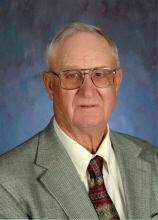 A Service of Celebration for longtime McClave area farmer Dean Smartt was held at 10:00 AM, Tuesday, June 25, 2013 at the McClave United Methodist Church with Pastor Calob Rundell officiating. A private family interment was held prior to the church service at the McClave Cemetery.

He is preceded in death by his parents and his brother Tom Smartt.

Dean is survived by his wife Norma of the family home, son Doug Smartt of McClave and his daughter Joyce (Bob) Baxley of Bristol, TN. Also surviving are his brother Lucien Eugene Smartt of Fredericksburg, VA, sister Joyce Carolyn (Earl) Ray of Ft. Collins, CO and his brother and sister-in-law John and Trudy Roesch of McClave as well as nieces, nephews other relatives and a host of friends.

Memorial Contributions may be made to the Hasty/McClave Fire Department, McClave United Methodist Church or to the Lamar Area Hospice either direct or through the funeral home office.
To order memorial trees or send flowers to the family in memory of Dean Smartt, please visit our flower store.