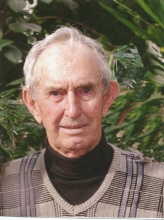 A private family inurnment service for Lamar resident and former longtime Wiley farmer and rancher, David R. Wollert, was held at 11:30 AM Wednesday May 23, 2012 at the Wiley Cemetery in Wiley, Colorado.

Per Mr. Wollert’s request, cremation has taken place and there was no public viewing.

Juniper
Village in Lamar at the age of 89.

Dave is survived by his wife of 68 years, Adeline of the family home in Lamar. His daughter Janeal (Greg) Thompson of Lamar, son Ronald (Suzan) Wollert of Wiley as well as his brothers; Ruben Wollert of Lamar and Richard (Rhonda) Wollert of Wiley, sisters; Emma Miller of Ft. Collins, CO, Ruth (Dale) Hency of Colorado Springs, CO and Juanita (Larry) Reinhart of Seattle, WA. He is also survived by his grandchildren; Tanisha (Sloan) Harrison, Brandon (Amy) Wollert, Shaugn (Marsha) Thompson and Michael (Diane) Thompson and his great grandchildren; Seton, Demi Rae, Chloe and Raya. Also surviving are numerous other relatives and many friends including close friends; Bill (Joan) Caldwell of Pueblo and Betty Schroeder of
Archbold, Ohio.

Memorial contributions may be made to the Lamar Area Hospice at P.O. Box 843, Lamar, CO
81052or direct through the funeral home at 209 South 4th St., Lamar, CO
81052.
To order memorial trees or send flowers to the family in memory of David R. Wollert, please visit our flower store.