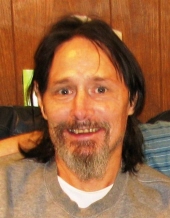 Darryl was born on January 1, 1962 in Denver, Colorado to Carolyn J. Frey, of  Pueblo, Colorado and Jerry B. Armstrong, Palmdale
California.  He passed away on June 29, 2012 in
Oklahoma City, Oklahoma.

Darryl attended Lamar High and was active in the Notables. After graduation, he married and entered the Army.

He spent his last year in hospice care, singing, and playing Christian music on his guitar for anyone who would listen.

Darryl was the grandson of Clarence and
Alberta (Haskell) Carr who preceded him in death.

He will be missed by his many friends and family.

A memorial service will be held at a later date at The Indian Church of the Nazarene in Oklahoma City, Oklahoma and interment at Bristol Colorado.
To order memorial trees or send flowers to the family in memory of Darryl W. Armstrong, please visit our flower store.