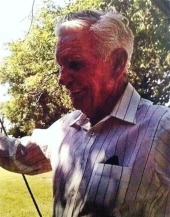 Darrell C. Colbert
A Celebration of Life for longtime Lamar resident, Darrell C. Colbert was held at 2:00PM on February 5, 2014 at the Peacock Family Chapel with Ian Blacker of the Lamar Christian Church officiating. Burial followed in the Fairmount Cemetery.

Visitation for Darrell was held on Wednesday, February 5, 2014 from 9:00AM until the time of service at 2:00PM at the Peacock Family Chapel.

Darrell is survived by his wife of 58 years; Mary Colbert of the family home in Lamar, daughters; Kathy (Bob) Osborn, Cindy Akers, Connie (Rob) Vallejos and Karen (Brian) Nunnery all of Lamar, his sister; Mary Hazelton of Riverside, CA. He is also survived by his eleven grandchildren, three great-grandchildren, and Jim Wilger (the son he never had) as well as numerous nieces, nephews, other family and a host of friends.

Memorial Contributions may be made to the charity of one’s choice either direct or in care of the funeral home office.
To order memorial trees or send flowers to the family in memory of Darrell C. Colbert, please visit our flower store.