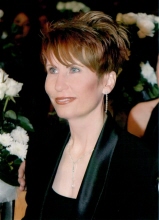 Darlene Mader
Broomfield resident and former Lamar resident Darlene Sue Stagner Mader, 56, went to be with her Lord on February 28, 2013. Surrounded by family, she went peacefully in the loving arms of her husband of 38 years, Rickard Lee.

Darlene Sue was born April 14, 1956 in Alamosa to James and Frances Stagner.  Moving to Lamar when Darlene was young, she was a proud big sister to her two little brothers Roger and Glen.  The beauty that she was, her big blue eyes were all it took for her to capture the heart of her one true love, Rickard Lee Mader.  A classic cheerleader meets athlete love story, they married when she was 18 years old, soon after graduating from Lamar High School.  After moving to the Tuscon, Arizona Air Force Base where Rick was stationed, she gave birth to their son, Kristopher Ryan, or “Topher” as she lovingly called her blue-eyed boy.  They returned to Lamar in 1977 and three years later along came Angela Marie, her brown-eyed, curly-haired little girl.  After raising their family in Lamar, Rick and Darlene moved to Broomfield, Colorado in 2004 where they would begin the next chapter of their life together.

While in Lamar, Darlene was faithfully devoted to her family and their businesses. Whether it was payroll or the paperwork, her brothers or her dad, she kept everyone and everything organized at Stagner Inc. for over 26 years as office manager.  At the same time, she applied her love of fashion by working with her mom at Jolie Fashions and her talent in interior decorating in her husband’s business, Daylight Donut.  Darlene went on to receive her Bachelor’s degree in Business where she graduated with honors. After leaving Lamar, she excelled in her position as Payroll Manager where she was greatly valued by her colleagues at Lender Live mortgage company.  Whether in her hometown of Lamar or in the big city, this small-town girl embraced each new challenge life presented her and truly blossomed as she worked to excel at everything she did.

Darlene’s work ethic mirrored her dedication and involvement in those things that she loved most: God and her family. She served as the Women’s Aglow Fellowship president and was an active member of the Life Center Foursquare Church where she and Rick taught youth group and raised their children to love Jesus.  From a square dancing set mom with the most fashion-forward dancers on the dance floor to a high school cheerleading coach who was determined to make athletes out of her girls, Darlene pushed others to achieve levels of excellence by inspiring them to accept nothing less than the best from themselves.

Ask anyone what they remember about Darlene and the first word to come to mind: classy. Always a lady from the time she was a tiny little girl, she was happiest when her momma had her in curls and bows and heaven forbid she get a speck of dust on her dress.  This love of beauty could be seen throughout her life from sewing her babies’ clothes and even her own, to her flare for fashion and talent for interior decorating and art.  Dressed to the nines and always put together just so, Darlene was quite possibly happiest when shopping with her girls.

Darlene’s outer beauty was far surpassed by the radiance of her inner beauty.  First and foremost, she loved the Lord and lived a life devoted to glorifying Him and loving her family. A daddy’s girl, Darlene was never too big to sit on her daddy’s knee, the man she loved and adored so much. She was her mother’s little sunshine who never outgrew getting all dolled up by her momma. In training from a very young age, Darlene practiced the art of mothering by trying to boss her two little brothers around – keyword: trying. And good practice it was as she was never too busy to be a momma to her two children whom she adored with all her heart. Nurturing and supportive, she provided motherly guidance with a strict but loving hand to raise her children to have true strength of character. Two peas-in-a-pod, her and her daughter loved to laugh, shop, and organize anything in sight when not talking on the phone for hours on end. Often tackling a new project around the house with her son, they loved to measure, level, hang, and hammer. Her role of mother only expanded as she went on to embrace and love her daughter-in-law, mother of her first grandbaby to whom she will forever be known as Mimi.

A lover of routine, Darlene’s favorite day of the week was Friday: “pizza night!” with her hubby.  In recent years, she began to blossom and break out of her routine as her and Rick began to explore the world together, visiting places like Spain, Italy, Lebanon, London, and Mexico.  Whether it was bike rides on a sunny day or hitting the slopes in the winter, Darlene and Rick were the best of friends.  While they may have met as two kids in love, they grew up together and developed a love to last a lifetime.  She loved, adored, and respected her husband with every ounce of her being –his love and devotion exemplifies what it truly means to be a husband.

Darlene is survived by her husband Rickard Lee Mader of Broomfield, CO; son Kristopher Ryan (Rita) Mader and grandson Daniel Lee of Westminster, CO; daughter Angela Marie of Corona del Mar, CA.  She is also survived by her parents James and Frances Stagner and brothers Glen (Mary Ann) Stagner and Roger (Leslie) Stagner, all of Lamar. She was also survived by 11 nieces and nephews, as well as many cousins and friends.

She was preceded in death by her grandparents, including her grandmother Polda Stagner of Lamar.
A celebration of her life was held at Lamar Christian Church, Thursday, March 7th, 2013 at 10am. Interment followed at the Fairmount Cemetery.

In lieu of flowers, the family is requesting that donations be made to fund research specifically for finding new and novel treatments for FLT3 mutant Acute Myeloid Leukemia. Our hope is to improve treatment for this disease so no one has to lose a loved one from this rare, fast-acting cancer that took the life of Darlene only 18 days from diagnosis to her passing. Checks should be made payable to the UCSF Foundation and mailed to: UCSF PO Box 45339 San Francisco, CA 94145-0339. In the memo line of the check, please write: Dr. Cathy Smith Research Fund in memory of Darlene Sue Mader. Gifts can also be made online by going to: https://makeagift.ucsf.edu/site/SPageServer?pagename=A1_API_GeneralGivingForm.
To order memorial trees or send flowers to the family in memory of Darlene S. Mader, please visit our flower store.