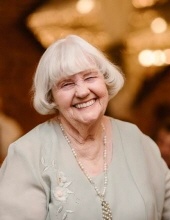 Charlotte VanMeter Rogers
A celebration of life for longtime Lamar resident, Charlotte Rogers, affectionately known to her family and friends as Char, will be held at 10:00AM on Friday, September 3, 2021 at the Peacock Family Chapel. Per Charlotte’s request cremation will follow.

Charlotte VanMeter Rogers was born to Alfred E. VanMeter and Edna L. Burkhart VanMeter on January 25th, 1941 in Denver Colorado and passed away on August 27, 2021 at her home in Lamar with her family by her side at the age of 80.

She received a certificate in computer business practices for farming from Lamar Community College. She was an avid reader and an excellent trivia player.

She worked as a secretary for the Financial Industrial Fund where her boss never wanted her to quit, until she became a Mother. Which she worked at tirelessly for the next 28 years when all her children left the nest. She was the VP of Rogers Farms for 46 years.

Char was a master video gamer saving Princess Peach Toadstool many times. She became “Remington Char” detective extraordinaire playing “Where in the world in Carmen San Diego ?”
Char was a Girl Scout Leader, school room mother, square-dance set mother, and all around fabulous cheerleader for all of her children, grandchildren and great grandchildren.

She is preceded in death by her husband, Jameson “Jim” Rogers and her parents.

Memorial contributions can be made to Southeastern Colorado Cancer Initiative either direct or in care of the funeral home office.

Services for Charlotte will be streamed live on the Peacock Funeral Home Facebook page.
To order memorial trees or send flowers to the family in memory of Charlotte Rogers, please visit our flower store.