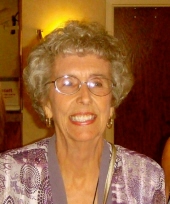 A Celebration of Life for former Lamar resident, Celia F. Kennedy was held at 10:00 AM, Saturday, June 29, 2013 at the Lamar Christian Church with Ian Blacker officiating. Interment followed at Fairmount Cemetery.

Mrs. Kennedy was born on August 5, 1927 at Meade, Kansas to Jacob D. and Vera C. (Porterfield) Heinson. Celia passed away on June 19, 2013 at Sparks, Nevada where her daughter Kathy resides. Celia was 85.

She is preceded in death by her parents; Jake and Vera Heinson.

Celia is survived by her children; Kathy Kennedy of Sparks, NV and Greg (Lisa) Kennedy of Kansas City, MO, grandchildren; Jake, Jessica, Amanda, Kathy and Sean and great-grandchildren; Emma and Michael. She is also survived by her brothers; Conrad (Ann) Heinson of Omaha, NE and Wade (Ida) Heinson of Lamar as well as her nieces, nephews, other family and friends.
To order memorial trees or send flowers to the family in memory of Celia F. Kennedy, please visit our flower store.