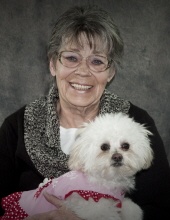 Caryn Kathleen (Kukuk) Hicks
A celebration of life and graveside services for Lamar Colorado resident Caryn Hicks will be held at 11:00AM on Monday, July 1, 2019 at the Peacock Family Chapel with Pastor Paul Floyd of the High Plains Fellowship Church officiating. Interment will follow at the Fairmount Cemetery in Lamar, Colorado.
Visitation for Caryn will be held prior to the services on Monday, July 1, 2019 from 9:00AM until 10:30AM at the Peacock Family Chapel.
Caryn was born on May 7, 1948 in Hawthorne, CA to Robert and Carmen Kukuk and went to be with the Lord on June 26, 2019 in Lamar, Colorado at the age of 71.
Caryn is survived by her 5 children, daughter Bobbi (Mark) Ketels of Lamar, Colorado, son Deric (Casey Fellows) Sherman of Butte, Montana, daughter Cyndie (Gary) Hodges of Thornton, Colorado, daughter Vicki (Dayn) Laude of Lebanon, Tennessee and daughter Carrie (Troy) Schlosser of Parker, Colorado. Her grandchildren Tyler Hoff (Jessica Cwik), Tyson (Lindsay) Hoff, Alec Laude, Daniel Loos, Jeremy (Cassandra) Sherman, Haley Conn, Courtnie Hodges (Will Hegwood), Amanda Elliott, Joshua Hodges, Leevi Hodges, Rylie Hodges, Zoey Hodges, Andrew Hodges, Athena Hodges, Ashley Laude, Austyn Laude, Mariah (Matt) Huber, Bryce Schlosser, Josh (Janelle) Ketels, Kaylene Ketels, Dianna (Daniel) Bellomy, Dustin Condon, Donavynn Kiernan, Richard Hodges (Cecily Miller), Carl (Tyler) Zachare, her great grandchildren Karsten, Zoey, Kaiden, Phin, Jaden, Greyson, Sage, Chase, Addy, Bailey, Joey, Nichole, and Declan, with two more special blessings on the way. She is also survived by her niece Stephanie (Bob) Larsen, great nephews Wyatt and Connor Larsen as well as numerous other family and a host of friends.
Caryn is proceeded in death by her parents Robert and Carmen Kukuk, sister Nancy Van Cleave, brother-in-law Orman Van Cleave, and nephew Kelly Van Cleave.
Caryn spent many years working for Hollywood Studios in California before relocating to Colorado. She loved spending time with her family, going to church, cooking and playing cribbage. She relocated to Lamar in July of 2018 where she made many friends, developed very close relationships and became very active within her community. She loved going to church, participating in bible studies, crafting, community luncheons and many other activities. Caryn always had a smile on her face and had a gift of making others smile as well. She genuinely cared about everyone. Her dog Chloe meant the world to her and they were great companions for many years.
Per Caryn’s request in lieu of flowers, memorial contributions may be made to Lamar Area Hospice either direct or in care of the funeral home office.
Services are under the direction of the Peacock Family.
To order memorial trees or send flowers to the family in memory of Caryn K Hicks, please visit our flower store.