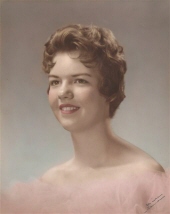 Carolyn Jean Fox, a beautiful baby girl was born to Sgt Richard K Fox and Dorothy (McMichael) Fox
on July 29, 1943 in Denver Colorado. “Jeanie” as she was called spent her childhood in Corning New
York and Lamar Colorado. Jeanie attended Lamar schools, where she was active in the Civil Air Patrol.
She was a wonderful writer during high school, and many of her stories were kept by her English
teacher. She was in the high school play “George Washington Slept Here” . Jeanie attended Lamar
Junior College.

In 1963 Jeanie married Orin McVey . Three children, Sherry, Monica and Shannon were born to the
couple. They lived on and near many Marine Corps Bases at this time.

In 1982 Jeanie moved to Juneau Alaska. She worked at the Buoy Deck , Squires Rest, the Sandbar,
and at the Juneau International Airport, where she met Spike Simpson.
In 1990 Jeanie married Stanley Taylor Simpson, known as “Spike”. The couple moved to a remote logging camp, Hobart Bay Alaska which was accessible only by a small aircraft on floats. Jeanie made many friends where ever she lived with her wonderful smile, caring nature and sense of humor.

After an injury caused Spike’s early retirement, the couple moved to a home on beautiful Beck Lake,
just out of Nikiski, Alaska. Jeanie loved the moose, bear and other wild animals that surrounded their
home. A good many pets called this place home. Jeanie inherited her Mother’s love of beautiful
milk glass and ruby glass, made by Fenton, Westmorland, and Fostoria and her collection filled the
home. She also sewed many lovely quilts, and was a wonderful cook.

In 2004 Jeanie and Spike moved with their dogs and Jeanie’s Fenton glass collection to a home near
Doniphan Missouri. Jeanie and Spike were able to realize their dream of raising horses of their own.
Jeanie continued to hunt through antique shops and added many beautiful pieces of ruby glass
and milk glass which were displayed on shelves made by Spike. Jeanie could always make a home beautiful.

On June 02, 2013, Jeanie passed away at her Missouri home with her husband holding her hand, and her beloved miniature border collie Andy at her side.

Services were held Friday June 28 at 2:00PM at the Peacock Funeral Home at 209 South 4th Street in Lamar Colorado. If you wish to make a contribution in Jeanie’s memory, we suggest Lamar Animal
Sanctuary Team, at 704 South 9th St. Lamar, Colorado 81052
To order memorial trees or send flowers to the family in memory of Carolyn Jean Simpson, please visit our flower store.