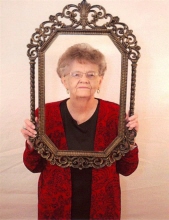 A funeral service for longtime Lamar resident, Carol L. Price was held at 11:00AM on Friday, September 19, 2014 at the First Presbyterian Church in Lamar with Pastor Rory Gillespie officiating.  Burial followed in the Fairmount Cemetery in Lamar.

Carol L. Price was born on December 25, 1932 in Glenwood Springs, CO to Ernest L. Goshen and Alliene Margaret “Peggy” Luke-Goshen and departed this life on Tuesday September 16, 2014 at her home in Lamar with her family by her side at the age of 81.

Carol was preceded in death by her parents.

Memorial contributions may be made to the Lamar Area Hospice and/or the First Presbyterian Church either direct or in care of the funeral home office.
To order memorial trees or send flowers to the family in memory of Carol Price, please visit our flower store.