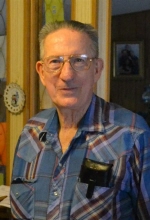 A service of celebration for longtime Lamar resident Carl Sykes, was held at 2:00 PM Wednesday January 29, 2014 at the Peacock Family Chapel in Lamar.  Jim Price and Skylar Garth will co-officiate the service and burial followed in the Fairmount Cemetery in Lamar.

Carl was born on March 22, 1933 in Ordway, Colorado to Carl Jacob Sykes and Mae Belle (McKnight) Sykes and departed this life on Saturday January 25, 2014 at Prowers Medical Center in Lamar at the age of 80.

Mr. Sykes was preceded in death by his parents; by one son – Troi Sykes of Lamar; and by one brother – Elmer Sykes of Alaska.

Carl Sykes is survived by his wife of 58 years – Wilma J Sykes of the family home in Lamar; by twin sons – Allen (Jamie) Sykes of Middlebrook, MO and Darrell (Jean) Sykes of McClave; by six grandsons; twelve great grandchildren; by one sister – Shirley Grant of Paonia, CO; and by one brother Virgil (LaVon) Sykes of Simla, CO; also surviving are numerous nieces, nephews, cousins, other relatives, and many friends.

The family respectfully requests that in lieu of flowers, memorial contributions be made to the National Heart and Lung Institute Foundation either directly or through the funeral home office.
To order memorial trees or send flowers to the family in memory of Carl Sykes, please visit our flower store.